Today I helped mum barrack for her team in the football.
My mum just loves footy, and barracks for a team called St Kilda.
Mum's whole family all barrack for St.Kilda, and today the Saints played in a finals match and WON !!!!! Yay!
Mum was very happy, and now her team get a rest next week then go straight into the Preliminary final to see who plays in the Grand Final. AWESOME ! 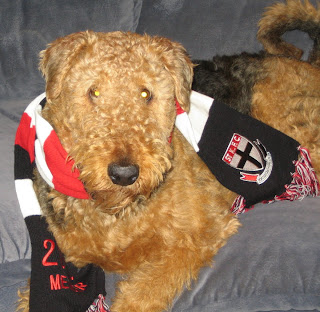 Do you think I look handsome in my Members Scarf?
Mum tried to get me to wear her cap, but I wasn't having anything on my heads - no way!

There were lots of pinkies at the football today - 84,000. That is sooooo many people!
Mum was sad she couldn't go to the game, but it is Father's Day here and we all went to nanna's place to see dad's daddy!
So we got to play with the stupid poodles again.
All this footy stuff was a bit tiring though, so I needed a bit of a rest up on the couch when we got home. 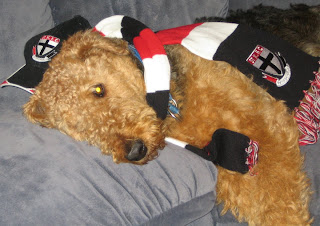 Lucky the footy was on tv. At least mum could see the game.
She scared the crap outta me every time she cheered and clapped or yelled at the tv though.

Strange pinkie behaviour indeed. If Ellie or I bark at the tv, the pinkies tell us to be quiet!

Oh well, 2 weeks before I will have to help mum support her team again.
I better practice my footy skills!

Wooooooo hooooooo.......what a fun day I had!
Mum and I had a girls day out, no dad, and no Bazzy! Yay, just me and mum!
Sunday was the Airedale Club picnic at Ruffey Lake Park.
Baz didn't come because he hurt his leg chasing the stoopid poodles at nanna's house on Saturday.
Baz has no brakes when he is running downhill too fast and he had a bit of a crash landing - ouch!
He is such a silly young thing!

Anyway, mum and I went and met up with 19 other gorgeous Airedales and had a lovely time.
Here we are lined up and smiling for the camera - notice who is out front lying in a perfect drop stay?????? ME.....who else! 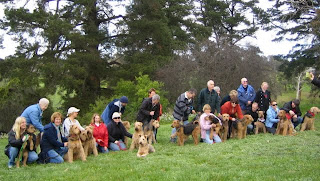 These two handsome fellows are my friends Cooper (the US Dale) and Fergus, who it turns out could be related to me. They are both Rescue Dales. 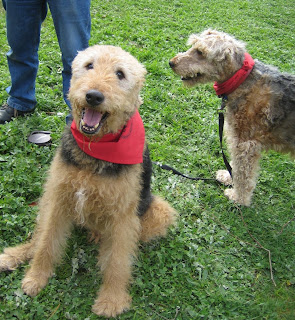 And this is our good friend Sam, he is also a Rescue Dale and a lovely old boy, he is just like me and wishes his little brother Mr P would just bugger off and leave him in peace.
Mr P and Baz are SO alike! 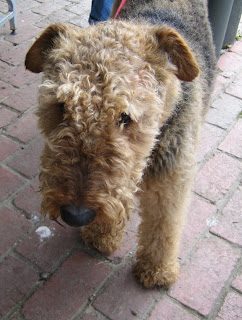 Oh and at the mention of the Airedorable Mr Perriwinkle - here he is.
This Aireboy is forever smiling. My mum just loves him to bits, and says he is alot like Bazzy.
Well she could be right, because they are both bratty little Aireboys! 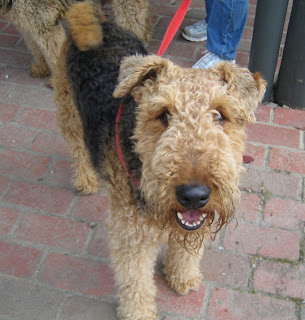 Oooooh and check out this darling little Airegirl. She belongs to Di Barclay from YorkPark Kennels (where Baz and I are from).
Her name is Charley and she is already winning ribbons in the Show Ring - Best Puppy this year at our Club Show! Well done to a sweet little Airepup. 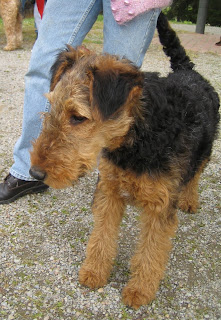 Miss Betty, With her fine beard!
What a beard to be proud of!
I want one like that, but mum keeps mine short....something about too much mess???? 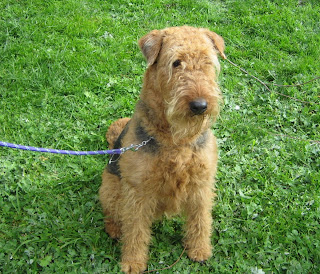 Another little YorkPark Airegirl, she is just a wee baby this one. Felicity cuddled her all day - much to Oscar's disgust. I think he was just a bit jealous, his mum was sharing cuddles. 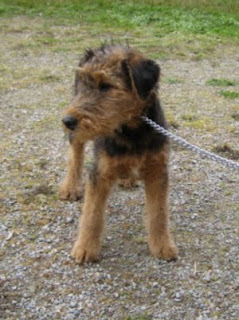 Oh and meet my newest friend George. He is from Planet Airedale, like us.
His mum Cara just joined our Club too. Now he is a nice Aireboy (see Baz, Aireboys can be nice!) 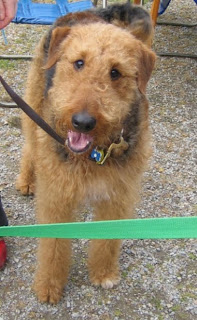 Look at me, sprawled out on the nice grass, just having a bit of a lie down after all the social sniffing and other Airedale greetings. 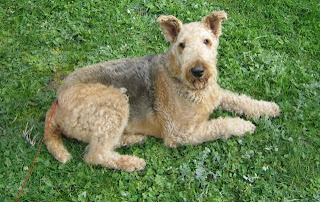 Mum can't remember this Dales name (well she is getting on in years now y'know) but he was soooo fluffy. And nicely brushed ha ha. 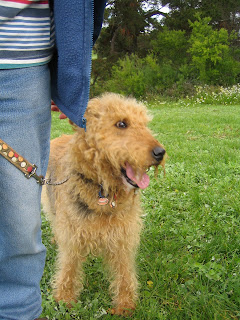 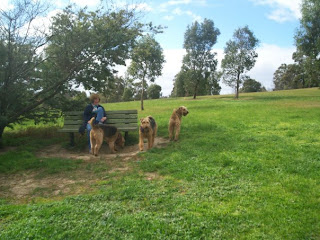 After lunch there was a big walkies around the lake. Some off lead and some on. You can tell who the good Dales are can't you? 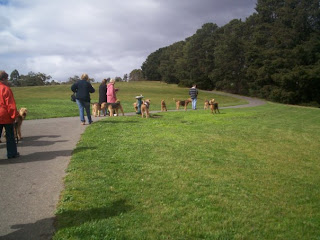 Some Dales even decided a swim was in order. Brrrr what were they thinking?
Don't they know it is winter and the water is cold? The old Aireboy in the red bandanna is Chester - he is 11 and another Rescue. very sweet.
Yes a bit of a romp, a bit of chase me, chase you, and see who can sniff the most butts! 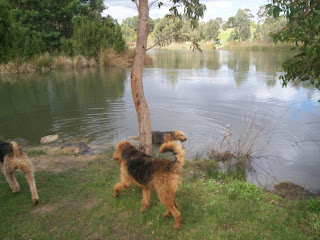 Looks like someone found something worth a closer look......I wonder what it was? Whatever it was they came out empty handed! 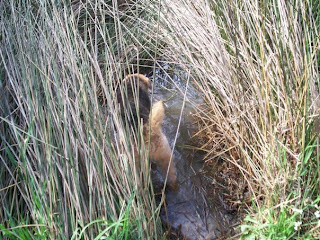 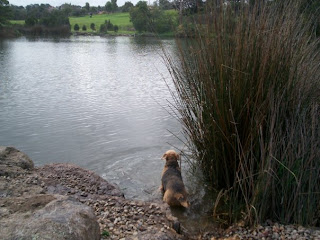 We even met some non Airedale friends on our walkies. Time to say hello! 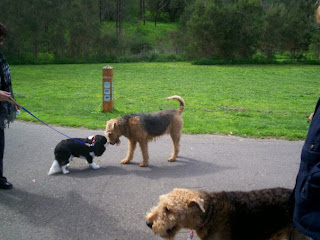 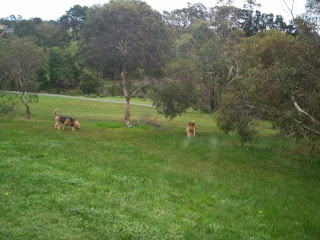 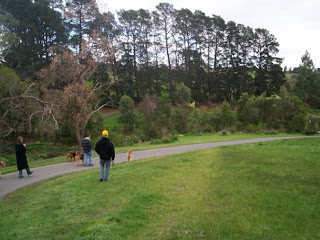 It really was a lovely day out, made even better by not having Baz annoying me. 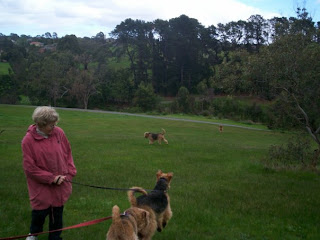 This is our friend Felicity's mum, she is holding Oscar. He is a great Aireboy too! 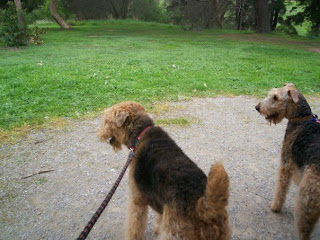 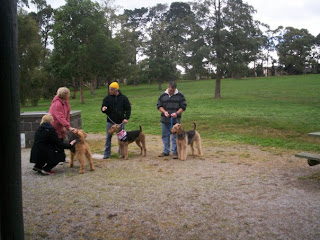 Well, I must say we all had a nice lunch, some great fun, and a social romp. The pinkies held a raffle (mum donated some really cool Airedale stuff) and we raised $234 for our Club.
Julie had some nice stuff on sale too, so mum brought some Christmas Cards and notepaper.
Mum enjoying all the blah blah blah with the other pinkies. i wandered off and had a lie down once I had enough and just let her do her thing. Eventually she put me in the car and i slept all the way home.
The big bed was the first port of call - time for a sleepies.
Miss Ellie - the society queen of the ATCV (ha ha) 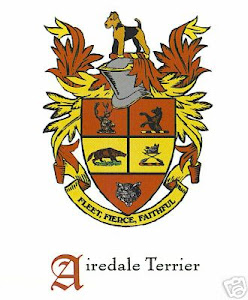 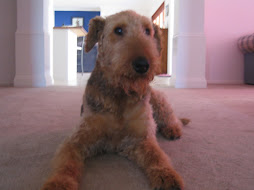 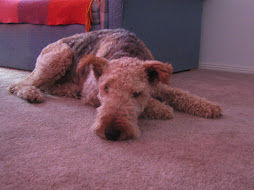 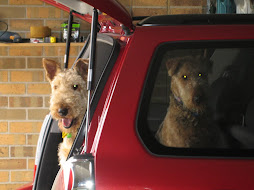